If you’re overthinking it, looking for signs he’s secretly attracted to you, let me tell you something that might surprise you:

Men are usually an open book when it comes to showing their attraction to women.

If we want a woman, we’re not very good at hiding it. You, on the other hand, are completely poker-faced when it comes to hiding your attraction to men!

What gives? Why the major difference?

The fact is: attraction is different for men than for women. There’s a saying:

A man falls in love through his eyes, a woman through her ears.

Men communicate their attraction through their eyes. If you’ve ever seen a man look you up and down in a bar with a smile on his face, c’mon. You knew he was into you.

Women, on the other hand, are attracted to men through their ears, meaning that it’s what they hear more than what they see that draws them to a man.

But regardless of what causes that initial attraction, some guys can be pretty good at hiding it, leaving you to wonder if he’s actually showing signs he’s secretly attracted to you…or he’s really just not that into you.

In this video and article, I’m going to give you some definite signs that he’s attracted to you, even if he’s trying to keep it a secret.

Or maybe he’s the personal trainer at your gym and you’re checking him out more than you are your heart rate.

Whoever this guy is, you think he might be into you, but you don’t want to put yourself out there and make a fool of yourself if he’s not. So you find yourself looking for signs he’s secretly attracted to you so that you can be a little bolder and maybe make that first move.

I’m a guy — plus I used to coach hundreds of men on how to talk to Sexy Confident ladies like you — so I know a thing or two about those clues he may be exhibiting that you might not even be aware of. So let’s dive into some signs he’s secretly attracted to you so that you can plan your next move.

1. He Gets Nervous In Your Company

When I coached men on how to approach women they were attracted to, I would take them to a bar or a park and give them pointers on how to introduce themselves to a woman. One of the first things I’d notice was how nervous they were.

I don’t think women ever realize how completely intimidating it is for a man to approach them. He worries you’ll reject him or laugh at him. Now, I know you wouldn’t, but he has that in his head. So cut him some slack.

If this guy is fidgety around you (and no one else), that’s a pretty good sign he’s secretly attracted to you. Reassure him that you’re interested too with a nice flirty smile or a hand on his arm.

2. He Smiles and Opens His Body Language

Let’s say a guy who likes you sees you for the first time in a week. As soon as he sees you, he gets this major grin on his face and gives you a big hug.

Let me break it down for you scientifically.

When he sees you, neuronal signals travel from the cortex of your brain to the brain stem (the oldest part of our brains). From there, the cranial muscle carries the signal further towards the smiling muscles in his face. Once he smiles at the sight of you, there is a positive feedback loop that now goes back to his brain and reinforces his feeling of joy.

So him associating you with joy? Another sign he’s secretly attracted to you.

His body language will also communicate his interest. Rather than crossing his arms or turning away from you (which communicates the very opposite), he will face toward you and even lean in when you talk (it’s especially cute if you’re short and he’s tall and does this!). 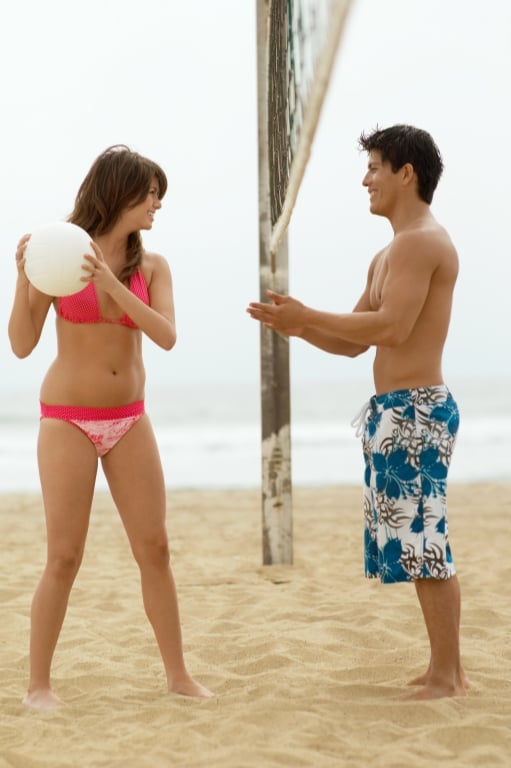 If he teases you, tease him back!

Okay…this one makes no sense, but it’s absolutely one of the signs he’s secretly attracted to you.

Some guys have what I call “middle school game:” when they like a girl, they’re really mean to her. Just like they did back in middle school…maybe minus him tripping you or pulling your pigtails!

Some guys are just so nervous that they default to what once worked for them a million years ago: teasing a woman or being a little mean.

But instead of you running and crying in the bathroom, knowing that this actually means he likes you should help you be a little confident, and maybe get you to tease him back.

4. You Get the Feeling He’s Into You

I’m always telling you Sexy Confident women to trust your gut. If you get the feeling that he’s attracted to you, don’t let your brain overthink it and convince your gut otherwise.

Your brain has a nasty habit of pooh-poohing anything your gut tries to tell it.

Gut: Hey that guy keeps checking us out! I think he likes us! Did he just wink??

Brain: He didn’t wink, dummy. He had something in his eye. He’s probably married.

There’s a reason scientists call the gut The Second Brain: it has an eerie ability to “know” things that sometimes your brain gets wrong. So give it a try. The next time you think a guy is showing signs he’s secretly attracted to you, find out and see if your gut was right.

5. He Works On Appearing Well-Groomed

If this man is someone you’ve spent time with platonically, pay attention to whether he seems to be putting in extra effort these days into his appearance.

Maybe his torn and ancient cargo shorts have been replaced by a pair of khaki pants?

Maybe he always seems to be freshly sprayed with cologne when you see him?

Perhaps he always seems like he just stepped out of the shower, when you used to tease him about how rarely he showered?

Any change in his appearance for the better may indicate that he’s trying to subtly get your attention. Make sure you praise his efforts…and put in your own. Shopping time!

6. He Has A Helpful Attitude Towards You 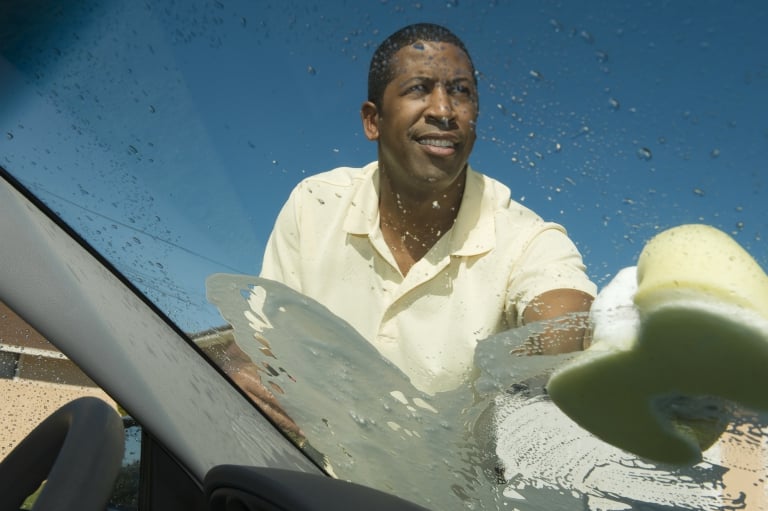 Is he going out of his way to be helpful? He’s definitely interested!

Men are natural providers. When we are attracted to a woman, we want to help her however we can.

He might bring you chicken noodle soup when you’re sick.

Realize that the average dude is not going to put this effort into helping a female friend. If he’s going above and beyond, he wants to provide value to you, the same way cavemen wanted to get the approval of their caveladies when they brought home a nice juicy dinosaur steak!

Back when I was single, and even when I first started dating Jessica, I would kind of groom my facial hair around my mouth with my hands. Not a sexy look, I know now! But I was so nervous that it was a kind of tic.

Men don’t even realize that they’re doing this. They may run their fingers through their hair (wishing they were running them through your hair). Or comb their beards with their fingers (hoping there are no crumbs lingering!). However he’s grooming himself, he’s trying to make sure that he’s looking his best in front of a lady he is absolutely smitten with.

You do it too, before you judge! How many women have I seen in bars sit across from a man and toss their hair or twirl it around their fingers? Countless. And that’s okay.

Conclusion: So You See The Signs He’s Secretly Attracted to You…

Well, I’m a grab-the-bull-by-the-horns kind of guy when it comes to encouraging you ladies to make the first move. I’m going to go out on a limb and guess that this guy isn’t super proactive when it comes to moving things to the next level if you’re having to research and assess whether he’s showing signs he’s secretly attracted to you. So if you want to make things happen, you may need to take matters into your own hands.

Whenever he shows one of these signs, give him positive reinforcement. Compliment his new shirt. Thank him for running an errand for you. Smile back.

If he’s still not moving fast enough for you, then be brave and ask him out. What have you got to lose? We can safely ascertain that he’s into you…he just may be too shy to make that first move. And you know he’s attracted to you, but he doesn’t know you’re attracted to him.  So things are a little one-sided. He’ll get the picture quickly if you ask him out for a picnic or drinks.

So talk to me. What signs he’s secretly attracted to you are you currently seeing? Do you have any doubts that this guy is into you? Share your thoughts in the comments below.

He showed all of these signs but I spent my whole time second guessing my gut that I was scared to make a move and wanted him to make it first.. now that we are an ocean apart, I wish that I would have. All we have now is a Facebook connection.

hi,
Your website is very helpful and informative. i wanna ask that if he remembers important details about me then its a sign of love or not?

I can feel his nervousness and it makes ME feel nervous because Im am empath. I wish hed just ask me out already because its starting to become a painful interaction…watching him stare and analyze me on the spot. so the other day I made what was a blantly obvious signal and touched him on the arm. I left it there longer than what was natural to me. It felt akward, like I was in slow motion, but it seemed to register a clear message to him. He looked at it and it was like his brain said, oh! She… Read more »

great! Thanks for sharing with us

Haha theres a guy who i attracted to and hes always stare by far because he knows im married.

A married man at work showed he was attracted to me. He touched/rubbed my arm one day while passing by as I was talking to a co-worker. I started talking to him at day’s end when most people had left. When he came back from a trip one day, we talked, & as I turned to leave, I touched his arm with a ‘glad you’re back safely’ comment. He grabbed & hugged me for a long time (like if he’d been longing to do this). After that, each day he was excited to see me (at work), we’d talk at… Read more »

I understand but you have to realize that he is married. I feel that as women we need to respect other women’s husbands because one day when we are married it can back fire on us.