So you’re looking for an emotional connection with a man, but you’re struggling to get it. Does this scenario sound familiar?

Girl agrees to go on a date.

The couple has sex.

Is this the story of your life? Do you find that, despite seeking an emotional connection with a man, you’re often left empty handed, especially if you had sex within a few days or weeks of meeting?

As we all know, men love sex, and a lot of them would rather just “hook up” than commit. No surprise there, right?

When you like a guy, you convince yourself that you’re okay with his casual boundaries. You’re so sure that you won’t fall for him, and that you are totally cool with late night booty calls.

Except that…after a while…you’re not okay with it.

Just like clockwork, you start to actually have feelings for this guy.

But then, it’s time to face the scary question: does he actually feel anything for you in return, or is he still happy to continue your casual arrangement?

You don’t want to put yourself out there and get hurt, but you are so ready to turn this sheer physical attraction into an emotional connection with a man.

So…how can you do that?

Keep your eyes peeled. It might be happening without you knowing it.

Watch this video to learn the 5 signs that show he’s developing a true emotional connection versus just a physical connection.

PS I’ve designed a program to deal with exactly this topic, and it’s called Casual to Committed. This program will help you convert even the biggest player into a loving and devoted boyfriend. Check it out!

Summary: Emotional Connection with a Man. Got it or No? 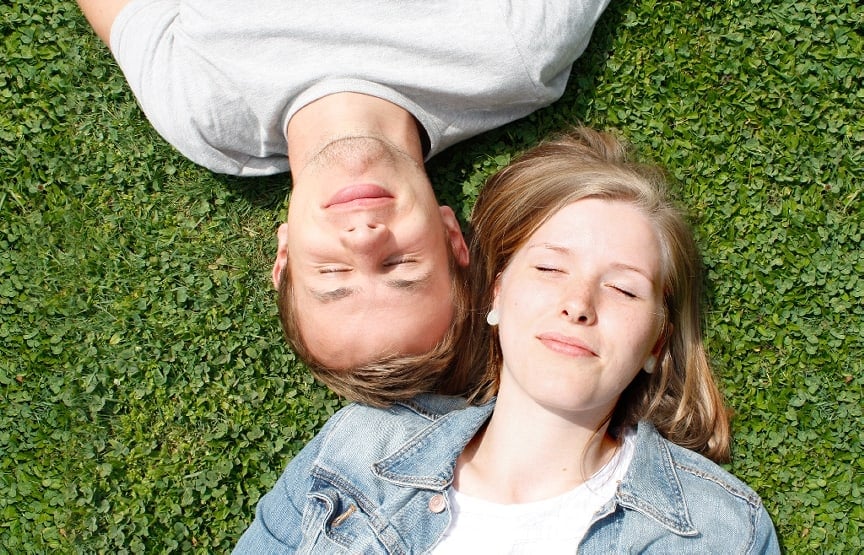 How can you know if you have an emotional connection with a man?

Look, lady, I’m sad to have to be the one to tell you this, but men absolutely can have just a physical attraction to you without any emotional attraction whatsoever. They can have sex — and enjoy it on the regular — without having any desire to take things to the next level with you emotionally.

A guy knows within .0548 seconds of seeing a woman whether or not he’d have sex with her. And trust me, he’s continuously making these snap judgments as he walks down the street, when he’s out at night, or even at his kid’s Little League game (I get it, men are scum, nasty pigs…whatever).

And interestingly, men will look at women differently, depending on whether they’re appraising them as lovers or friends.

Science has proven that men are more open to casual sex than women. In a study conducted by the Department of Psychology at Johannes Gutenberg-Universität Mainz in Germany, when either men or women gave an invitation for casual sex to a member of the opposite gender, overwhelmingly more men consented to the offer.

So if you’re going to deny this fact that men are often more interested in physical attraction than an emotional attraction, you’re being naive.

Women who get what they want (emotional connection with a man) acknowledge that men think about and want sex. A lot. The women who get ahead are those who understand men’s heads (both of them) and can differentiate between physical attraction and emotional attraction.

You may want to emotionally connect with a man, but you need to be tuned into those signs that he’s emotionally attached to you…otherwise, you need to decide if you’re okay with things continuing to be physical.

Here’s the key difference between physical and emotional attraction:

Physical attraction = He’ll go on a few dates with you + he’ll have sex with you.

Emotional attraction = He FEELS something for you. The dates and sex are bonus.

Still unsure of which way this guy is swinging? Let’s look at signs that you do indeed have an emotional connection with a man.

1. He Has Introduced You to His Friends Has he introduced you to his friends?

I’m going to be honest: dudes are super picky when it comes to introducing ladies to their friends. Why? If it’s not going anywhere, we don’t want to be teased mercilessly about the girl by our bros.

And we don’t want to make her think that it’s serious by introducing her to them.

So if you made it past this threshold, you’re golden. He likes you.

But let’s go a little deeper on this, because “meeting the friends” can take several forms.

If you just meet them in passing, like when you’re stopping by his house and he’s having the boys over for poker night, you won’t get much of a chance to put your best foot forward. Still, you’re being assessed, so know it. Your dude wants to get his friends’ take on you, and given that you only have a few minutes to make an impression, you may be judged on your looks.

On the other hand, if he makes plans with you and your friends, this guy wants to be your boyfriend. He’s not too concerned that his friends (or you) will embarrass him, and he’s ready to join the two forces that matter in his life.

So, to recap: if he’s ready to introduce you to his friends, this is one of the signs of emotional connection!

2. He Wants to Hang Out While the Sun is Out He should enjoy spending time with you during the day.

If he only texts after 9 pm to “hang out,” knowing damn well it’s too late for dinner, he may only want to have sex with you.

Sex is great and all, but you’re looking for more of an emotional connection, and that doesn’t happen between the sheets.

A guy that likes you, that has that emotional attraction with you, wants to spend time with you during the day. A guy who’s into you will ask you to go on a hike or check out a festival in his ‘hood.

He is not a vampire. There is no reason why he can’t ask you out during the day.

So look back over the past few dates you’ve had with this guy. Did they involve you wearing sunglasses? Did you even leave the house? Assessing when and where you spend time with him can help you determine if you have an emotional connection with a man or not.

3. He Likes Talking on the Phone with You 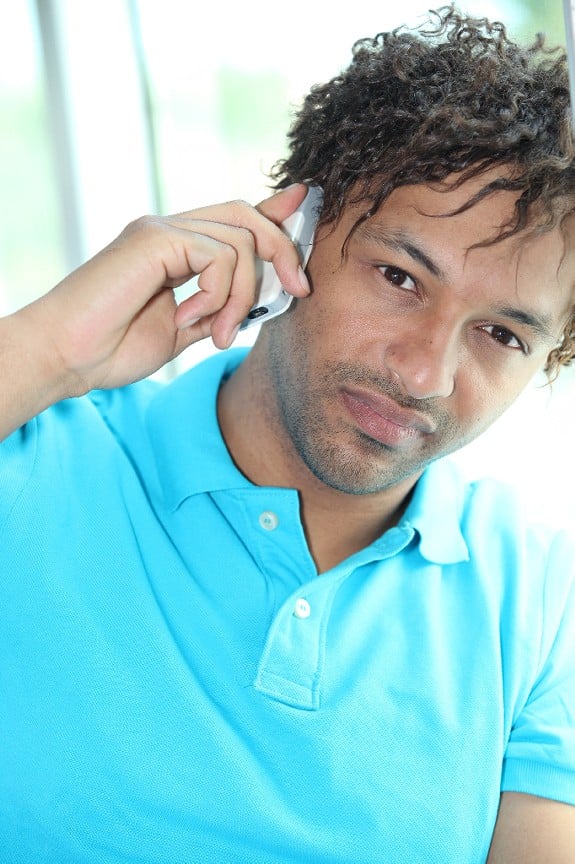 He’s not afraid to talk on the phone.

I’m not sure exactly when the art of talking on the phone with a member of the opposite sex died out. Probably when texting got huge.

But there’s something to be said about having a voice conversation with someone that takes a relationship to the next level.

Heck, even dating apps realize the benefit. This new app, Hotline, encourages members to talk on the phone through the app before they can meet. It seems to be working: the average call lasts 25 minutes.

And actually, there may be a resurgence in phone calls on the horizon. Author Sherry Turkle, who leads MIT’s Initiative on Technology and Self, wrote the book Reclaiming Conversation: The Power of Talk In The Digital Age, and found that hundreds of the people she interviewed for the book had grown tired of communicating via text. In an interview with Wired, she said:

“The hopefulness in Reclaiming Conversation comes from interviewing a generation who took their devices for granted, had seen that too much texting had undermined friendships and family relationships, and were ready to talk and call.”

Anyway, all this is to say that talking on the phone can reinforce that emotional bond you’re looking for.

But does he only text you? That’s not out of the ordinary, but what happens when you suggest a phone chat? Does he call that instant, or does he come up with an excuse not to?

If he is eager to chat on the phone, you’re nurturing that emotional attraction that you’re looking for.

4. He Takes You on Real Dates If he takes you on real dates, he likes you.

You: Absolutely! What do you want to do?

Him: Uhh, Netflix and chill?

Beyond simply hanging out with you during the day and not just during peak sex-having hours, does he actually ask you out? On a bona fide date?

Or is he the King of the Hangout?

There’s a difference between going on a date and just hanging out. Hanging out requires very little energy, and often results in having sex. Sure, a date can end in sex too, but it takes at least a minimal amount of planning and money to go on a date. Putting forth that effort says that he cares.

So if he’s picking you up at your place, maybe even bringing you flowers if he’s an old-fashioned kind of guy, and taking you out for dinner or drinks or a movie, then that’s great! This is a sign of emotional connection between you two.

5. He is Okay Hanging Out Without Having Sex with You Spending time together shouldn’t be about sex.

You: Hey, do you want to come over?

You: I’m totes on my period right now. But we can cuddle!

Him: Uh, actually, I just remembered that I have plans.

In a real relationship, sex is not the center of your world. Yes, it’s important, but there will be many times you’re together that you don’t have sex. And sex, in its frequency and passion, can change the longer you’re with a partner.

But if he doesn’t seem interested in spending time with you if he can’t get some, he’s in it for the sex. He is not looking for a relationship with you.

On the other hand, a man who’s totally hooked on you won’t care that you’re on your period or have a headache. He wants to spend time with you because he cares about you, not because he sees you as an object to fulfill his sexual desires.

Conclusion: Finding That Emotional Connection with a Man An emotional connection can lead to love.

Here’s the deal about having sex with a dude who’s only physically attracted to you. The moment a man has sex with a woman, there is an instantaneous transfer of relationship power from girl to guy.

Once sex is completed (or at least he’s “completed” if ya know what I mean):

You instantly become MORE emotionally connected to the man.

The man instantly becomes LESS physically attracted to you.

So unless the guy feels the emotional connection to back up the physical attraction, he will instantly be less interested, and if he’s a true d-bag, he won’t return your texts.

So Adam, you’re telling me that once a dude gets his thang on, he gets less interested in me. REAAAL PROFOUND!

But it’s not our fault.

We’re genetically dispositioned to mate with as many women as possible. Think about cave men times.Those dudes knew that they likely wouldn’t live long (the risk of being stomped by a dinosaur being great), and so they wanted progeny to pass their manly genes on to.

The best way to do that? Have sex with as many cave hotties as possible.

Monogamy is a modern construct, and one that many experts argue isn’t natural in the animal world. And yet women like you long for one single mate they can rely on for the rest of their lives.

There’s nothing wrong with that.

Men will say anything, but what they do is the real proof of how they feel. If he’s showing the signs of emotional connection, this relationship has legs. Nudge it in the direction of being more serious, and you’ll be rewarded with the knowledge that this guy could actually be The One.

Take matters into your own hands, ladies. If you have that emotional connection with a man, take it one step further by enrolling in my Casual to Committed program today!