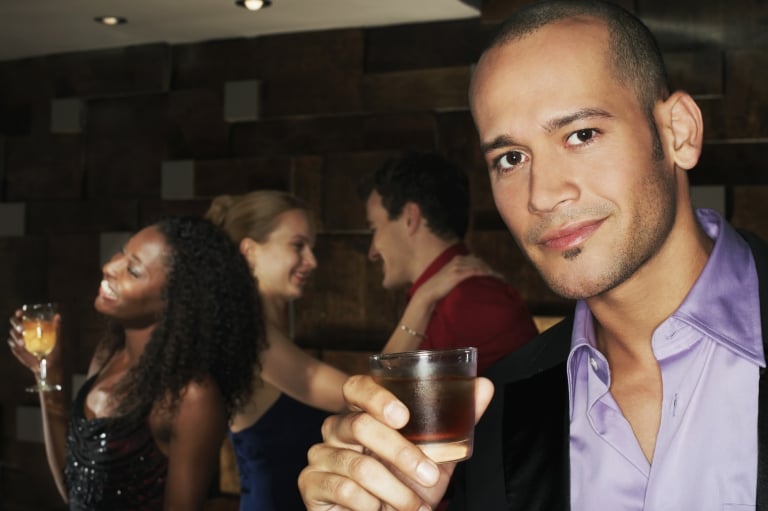 So you’re at a bar or a party and just like in a movie, you lock eyes with a guy across the room. If this were a movie, he would glide over and introduce himself. Alas, it is not. So, now you’re left trying to figure out how to get a guy to talk to you.

You’re not in college, so this whole dating thing is a lot more confusing and stressful than it was when you were younger. Maybe you’re a little shy, so you’re not comfortable starting a conversation with a man. You’d rather he approach you, but at this age, it’s a heck of a lot harder to know who’s single, who’s straight, and who’s interested.

Still, there are a few ways you can learn how to get a guy to talk to you, no game-playing required!

Why Guys Aren’t Great at the Walkup

If you don’t want to initiate the conversation, that puts it on the guy. But I need you to know: a lot of men aren’t great at approaching women. Just like you, they’re unsure whether you’re available or interested. Just like you, they might be shy or insecure.

And if you’re surrounded by your girlfriends? Forget about it. That’s a whole other level of intimidation!

Men often fear rejection. There’s this fallacy that men are tough, that they aren’t bothered by the things that women are easily upset over.  I can tell you, as a man, that I can be sensitive about things that my girlfriend is sometimes surprised about. And when I coached men on how to talk to women, every single one of my clients would say, “but what if she turns me down?”

I know, I know. From your perspective, you know you won’t turn down a guy that you’re attracted to. I’m just letting you know that the male ego is fragile, so if you want something to happen, you may need to take matters into your own hands.

So…if you don’t want to start the conversation, here are a few ways you can learn how to get a guy to talk to you. From there, it’s up to you to make sure the conversation is a success!

1. Smile at Him Frequently

We know that body language plays a huge role in attraction. That starts even before you’ve spoken to one another. Smiling is one way you can communicate your interest without saying a word.

There are different types of smiles. There’s the polite smile you give someone you pass on the street. This isn’t what we’re going for. Instead, conjure up a feeling of happiness inside, and let that genuine feeling shine through your smile. I remember very distinctly seeing a girl I passed on the street smile at me as if she was genuinely happy to see me. I dunno…maybe she just watched a funny YouTube video and was thinking about it. Or maybe she was into me. Either way, it really impacted me. 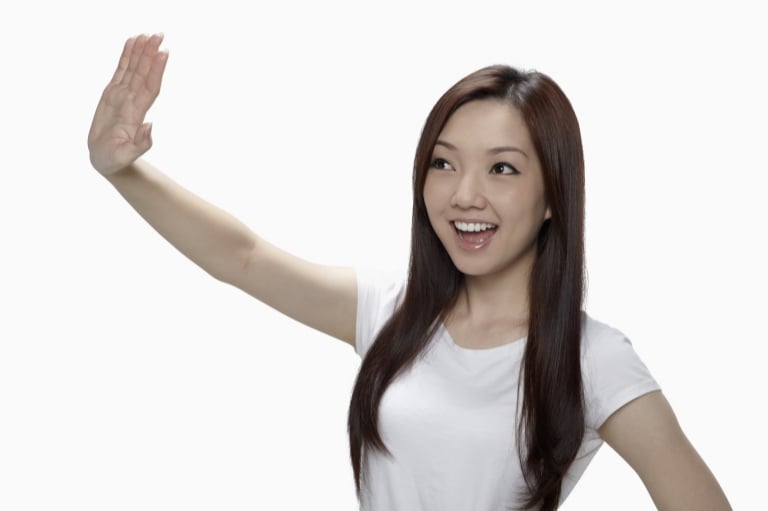 Make sure he knows that you want his attention.

Another low-effort way to get his attention is to wave to him across the room at the bar or party you’re at. Do this if the two of you keep making eye contact and you’re ready to let him know it’s not an accident.

There are a few scenarios that will happen next.

The first: he looks behind him to see who you’re waving at (kinda adorable, right?). You point to him (“you. YES, you!”) and motion him to come over.

The second: he gets the hint and comes over and introduces himself. Conversation ensues.

The third: he’s a little confused, but comes over anyway. “Have we met?” he asks. That’s your cue to say something like, “Not yet!”

Let me let you in on a little secret: men think it’s freaking hot when women reverse roles when it comes to stuff like this. We’ve all seen movies where the guy sends over a drink to a sexy lady across the bar. She looks up to see who bought her a drink, and he’s there, smiling confidently at her.

Just imagine the look on his face when the bartender puts another beer down in front of him and says, “Compliments of the lady,” and nods in your direction. What guy wouldn’t go talk to her?? (I should totally write rom-com movies!)

4. Brush By Him on the Way to the Restroom

Okay, so you’re not ready to buy a man a drink in a bar. Here’s another way you can get a guy to talk to you. If he’s seated on the path to the restroom (even better if the bar is crowded), make an excuse to go to the ladies’ room and confidently walk past him. If there’s an opportunity to lightly brush by him without it being out of the ordinary, do it.

A female friend I know loves to put her hand on the lower part of a guy’s back and say, “Excuse me” as she slides by. This always gets their attention!

You could even find something to stop and talk to him about on your way back. You could ask what he’s drinking, or what the score for the game is. If he doesn’t bite, just keep walking. No harm, no foul. But you never know where a little innocent question might lead!

5. Ask Him to Take You and Your Friends’ Photo 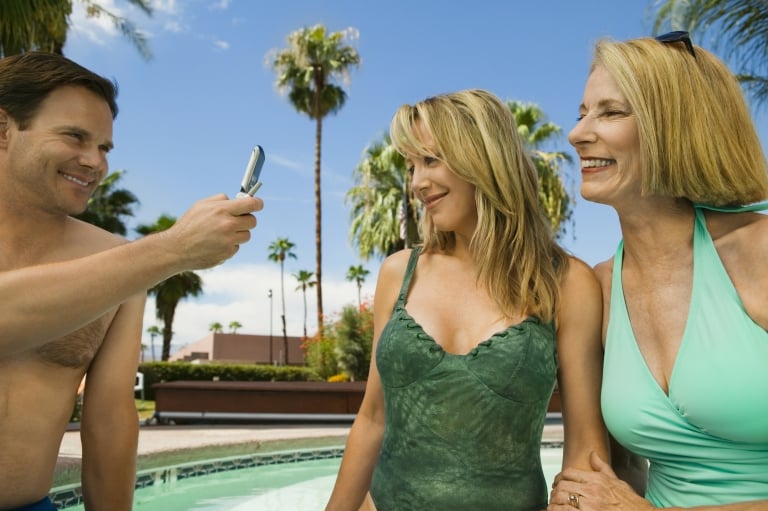 You could take a selfie…but why would you with a cute guy around?

Another seemingly innocent way to get his attention is to ask him to take a photo of you and your friends. Ask him to take a few, and tease him about his photo skills. Then lean in to see the photos while he’s still holding the camera. Introduce yourself. See where it goes.

6. Ask a Friend Who Knows Him to Introduce You

Let’s say you’re at a party and all night you’ve been checking out one man. You ask around and find out that your cousin Ted knows this guy from work. He gives him two thumbs up, and even says he knows he’s single.

Call in a favor by asking Ted to introduce you! Maybe he can think of something the two of you have in common that will make for a great intro.

7. Have a Friend Talk to Him to Find Out if He’s Single

You might be too shy to approach a guy, but I’m willing to bet you have a gutsy friend who has no problem talking to men! Your wing woman will be happy to chat him up to find out if he’s available. She can point you out across the room (and you can act embarrassed and surprised!), and if he digs you, he’ll come over with her to meet you. It’s a bit of a crazy way to get a guy to talk to you, but it can work!

8. Talk to His Friend

The flip of this is that you (or a friend) can ask one of his friends if he’s single (when he’s not nearby). That way you don’t have to risk being embarrassed directly by asking him. Of course, his friend will probably tell the guy that you inquired, but if he’s not single, you can duck out before that happens.

You can also come up with an excuse to talk to his friend if he’s standing there. You could compliment him on his shirt or ask him what time it is. You’re slowly infiltrating this guy group!

9. Stop Looking Down at Your Phone!

If you want to get good at learning how to get a guy to talk to you, you’ve got to appear available! I know you default to pretending to read an important text (when in reality you’re browsing your Bumble matches) to avoid feeling awkward in public, but a man will not approach you if you seem occupied.

So I challenge you: the next time you’re in a public place alone (even if there’s no cute guy in sight), don’t pull out your phone for 10 minutes. Just enjoy your company. People watch. Make mental lists. Smile a little. Get comfortable doing this, and your confidence will skyrocket.

10. Don’t Always Surround Yourself With a Gaggle of Girls

Just like you being on your phone can deter a man from talking to you, so can you being in a large group of women. What man would dare walk into such an intimidating situation??

If you are with friends, try to put yourself on the edge of the group or just go by yourself to get a refill at the bar. Separate yourself from the crowd and make eye contact, giving him the signal to come talk to you.

Yes, sometimes it’s hard for men to talk to women. But if you make yourself approachable, show a little interest from across the room, or even be a little forward yourself, you can successfully learn how to get a guy to talk to you!

Practice these strategies and figure out which works best for you. Above all, I want you to be comfortable with whatever you do. If having a friend find out if he’s single, for example, makes you queasy, opt for another, like brushing by him on the way to the restroom!

Add an extra dose of confidence to your game and it’ll be even more easy to learn how to get a guy to talk to you! Join the Sexy Confidence Club today to get exclusive content and great resources.

Amazing, it really encourages me to talk to him and today we are happily married, thanks

7 Scientific Signs A Guy Is Falling In Love With You