4 Signs of a Healthy Relationship (He’s a Keeper) 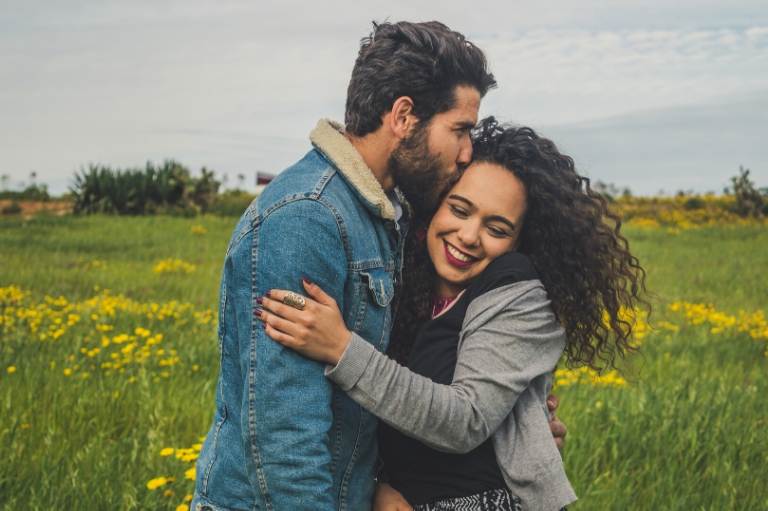 Have you ever been in a relationship that was so exciting, where you never knew what was going to happen next? One that felt like a roller coaster?

That guy was totally unpredictable, wasn’t he?

Him: Man, I love you! I just want to be with you forever…

You: [totally smitten] I love you too!

Him: …But I need to go to Mexico and tame wild horses for a couple of months. Maybe I’ll see you when I get back?

And because a relationship like that is full of erratic emotional energy, you become even more addicted to it. You fantasize that the roller coaster will stop sooner or later, but in the meantime, you’re kinda enjoying the ups and downs, in a sad way.

As time goes on, however, you realize that those hot and cold qualities that first attracted you to this guy are starting to drive you #^[email protected] crazy in the relationship.

Let me break some news to you: this is not a healthy relationship.

Over the past ten years of helping sexy, single ladies like you find love, I’ve learned one very important principle: healthy relationships are boring.

But you know what? That’s a really good thing, and I’m going to explain why in this article and video.

I want to share a story about a client I used to coach. When we were working together, she was dating a musician. He said all the right things to her:

…how much he loved her…

…how he wanted to have children with her…

…how he wanted to buy a house with her…

…but then he’d disappear on a gig for months at a time. Sometimes he’d take her to shows, but not that often. She told me that this was the most exciting time in her life. After all, she was dating a rock star! It was fun and exciting…but she could tell something was off.

One night, she was at a venue where he was performing, and she couldn’t find him anywhere. So where was he? In the bathroom having sex with a random woman he met at the bar.

Exciting, yes, but also maddening. And definitely not love or a healthy relationship.

Healthy relationships tend to be boring. They don’t evoke these crazy, emotional fits because they are, by nature, stable. If you love that roller coaster feeling, you may not want or need a healthy relationship right now. And if that’s where you are, that’s okay. You may not be ready to settle down after divorce. Maybe you never really dated or played the field before you were married, and you want to take the opportunity to do so now.

But there will likely come a time in your life when you value stability, security, and long-term monogamy. And that’s when your relationships will lose some of that shiny new toy feeling. But the good news is that healthy relationships are rich with love. And guess what? RICH is an acronym for the components of a healthy relationship:

Let’s look at each so you know the signs that you’re in a healthy relationship.

A Healthy Relationship Has Respect

If you’re in a healthy relationship, your partner will respect your privacy, your space, and when you want to get physical or not. You won’t have to defend your right to hang out with friends instead of him or feel bad that you’re not in the mood for sex one night.

And this respect goes both ways. If you are really in love and ready to commit to this man, you will respect him, his opinions, and his decisions. You won’t belittle him or make fun of him (light joking is fine, but if you’re doing it to hurt him, that isn’t respect).

If you feel you are being disrespected in a relationship, and you don’t feel like you can communicate that fact to your partner, then you’re not in a healthy relationship. In the example I gave about my client dating the musician, you clearly see that he didn’t respect her or the relationship. 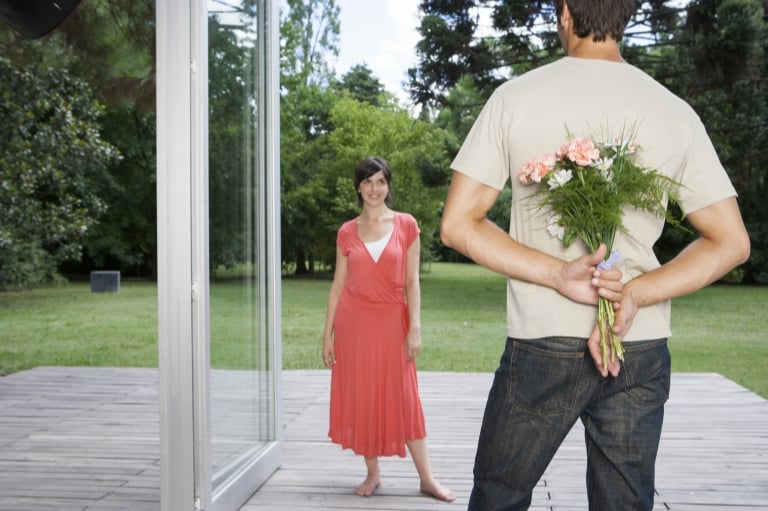 Does he prioritize you and make you feel important?

You should feel important in a healthy relationship. Period.

I had another client who was in a relationship with a guy she didn’t see often because he was “busy with work” (or so he said). When they did see each other, it was always at her house, where they always had sex. They never went out for dinner, and she never met his friends. You see where I’m going with this.

Needless to say, she felt incredibly unimportant to him. I told her that for all she knew, he was married! Whether he was or not, he didn’t carve out time in his life for her beyond the occasional bootie call, and she needed to value herself more than that. 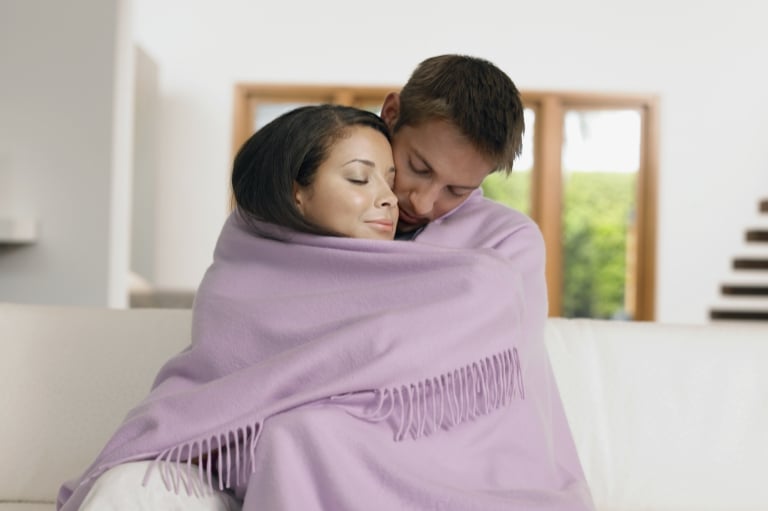 He doesn’t run from commitment, and that’s a good sign!

It’s impossible to trust someone unless you know that they are monogamous.

I know these days, it’s more common to start a relationship with something casual, and maybe you don’t want to rock the boat by asking for more. But it’s important for you as a powerful single woman to put your foot down and set boundaries about what you’re looking for in a relationship before this “casual thing” goes too far and you start to have feelings for him that he can’t return because he doesn’t want a relationship.

If a man is ready to commit, there’s a much greater chance your relationship will thrive long-term. In a study published in Social Psychological and Personality Science, researchers found that people who were ready for commitment were 25% less likely to break up over time. The opposite is true, too. If the man you’re dating is reluctant to commit to you, you should see that as a sign that he’s probably not The One, and that you won’t be able to force him to commit.

And remember: Never commit to a man unless he is fully committed to you. 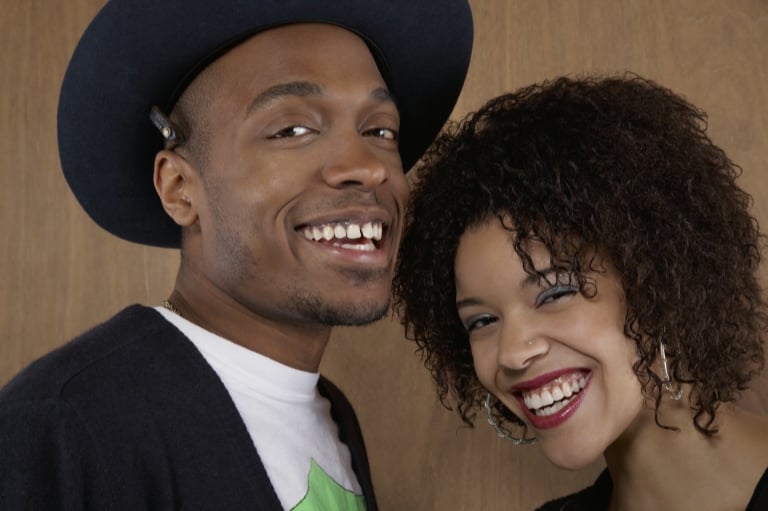 Happiness should be a part of your healthy relationship.

In a healthy relationship, you both want the other person to be happy, and you’ll do anything you can to make that happen.

Now, that doesn’t mean that you always put his happiness before your own, or that you have to give up important things so he can get what he wants. But it doesn’t feel like a sacrifice for you to put his needs first sometimes, and he’s balancing that by doing the same for you.

But are most couples happy, you ask? According to eHarmony’s 2019 Happiness Index, 83% of American couples are happy. Some of the things these couples had in common include an equal, monogamous partnership, open communication, and healthy sex life.

So those are the four components you need to be RICH in love in a healthy relationship.

Even if you don’t think you’re in the right relationship now, I need you to know that you’re on the right track. You are reading this article right now because you’re ready to change your life and find something good. You’re here because you want to change the trajectory of your love life from the disappointments you’ve had in the past. And just showing up and being ready for change is half the battle. You’ll find the man that is perfect for you. Trust me.

Keep these RICH elements in mind as you date so you can ask yourself whether you’re in a healthy relationship or on a roller coaster that you need to get off of.

It may not seem sexy to be in a boring, healthy relationship, but trust me: you’ll love it. Once you get away from that drama—which I know can be addicting—you’ll find that staying in and watching Netflix with a man you can truly trust with your heart is so much better than crying over a cheating, lying musician in a bar!

Leave a comment below and tell me that you’re ready for a healthy, boring relationship!

I like a widower, I see now he wants affirmation from me but not done loss of death of wife. I was hoping his interest would be able to move on …. I see now , I’m moving on I deserve more, not his fault my fault…. he is a good Christian man that I’m looking for…. but till he feels my absence, I ll see bye bye or he will feel loss of someone who admires him . So hard I just realized….

What if you found all that but are not ready to commit because you just got a divorce and are scared it’s too soon?

Thank you for not cursing in your video. You have such great content, it’s so not necessary. Thanks for the info.

I’ve just started a healthy relationship, but I don’t want it to be boring. I am concerned as he has cheated on previous wife’ but he said they never really connected talking honesty & affection. He’s going to counselling as it devastated his family & has said he doesn’t want to do it again. I’m the opposite to the ex wife I’m stable on no depressive medication, I’m fun outgoing happy very open & talk hard or easy stuff. I’ve learnt strong boundaries after my break up as I was taken fir granted & not appreciated. I feel at home… Read more »

One of my favorite webcasts…after finishing the training webcast earlier. That said…totally, totally agree with the “RICH” principle…nice holidays, friends fun…etc…and a good sense of humour! AND…CAREFUL what he posts on social media. …#winwin ❤

There are a few examinations that show that patients with PTSD use cannabis items to lessen flashback power (an automatic renewal of a horrendous encounter through uncommonly clear recollections, during which it appears to be that an awful reality from the past attacks the reality. For instance, https://cbdoiler.net/ heroes can hear blasts, attempting to escape nonexistent bombs, and so on)

Loved this article really hoping to get into a relationship with these positive signs
~Nishit Singh
Uprisehigh.com

At the moment you need to figure out this aspect of your health. Until recently, I had the same question and I decided to look for a tool for myself that would be useful for restoring balance between rest and work. Finally, I found this service https://westcoastsupply.cc where I order products that help me feel relaxed and gain strength for further work. I really hope that it will be useful to you.