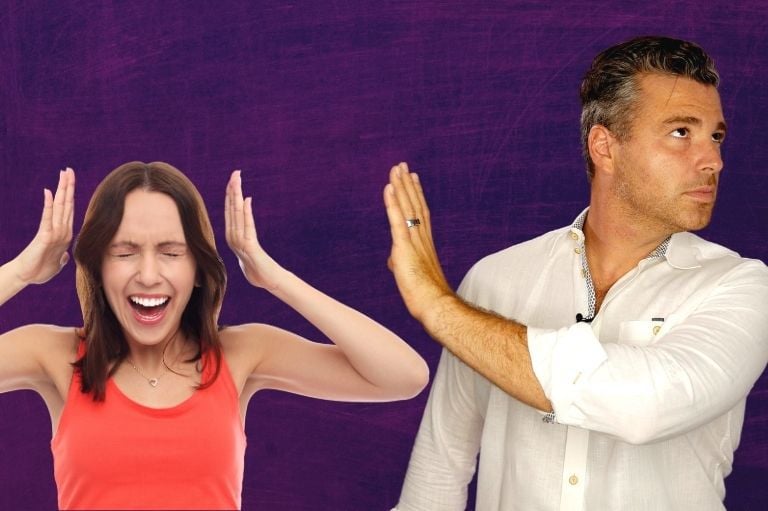 You probably think about all the things that get on your nerves about men.

They burp in inappropriate places (is there an APPROPRIATE place??)…

…they leave their underwear on the floor…

…they sometimes act clueless as to how you’re feeling.

But…let me ask you…have you ever considered the female behaviors that annoy men? How YOU might irritate a guy?

The fact that men’s and women’s brains are wired differently means that the two genders are going to act differently, and different things will annoy them.

It’s a good idea to know those female behaviors that annoy men so you can avoid them.

Leave a comment below: has a guy ever told you that certain behaviors get on his nerves?

P.S. Did you realize that there are just seven little steps to finding true, lasting love? Learn about the Little Love Steps and start on your path to happiness.

Constantly changing your mind. It drives me nuts!!!

Men have a totally different idea of communication… for them silence is golden..time to think, clear the mind, meditate, they rarely ask how you are … !! other than when in “loving” mode ..

Women hate (1) men making crude and vulgar comments. Sometimes what sounds “okay” to a man is crude to a woman. (2) Male chauvanism is the worse offence. (3) Expecting women to do the housework and to clean up after them is unforgiveable (I know that mothers brought them up like that and it is mainly their faults but it insults us). (4) Feeling bad about women earning more or having a higher position in the career world is unacceptable. (5) untidiness. I hope this ads clarity

MEN THAT ARE NARCISSISTS..PERIOD!!! NEED I SAY MORE?

I have a wonderful fiance, and we get along very well. But you mentioned that men hate the silent treatment. My fiance said the same thing, however when I am upset about something and I tell him , he gets very defensive and acts like my feelings are ridiculous instead of trying to explain his actions or trying to understand why I feel the way I do. So, what’s up with that? It makes me wish I didn’t talk to him.

I wish guys would communicate more and not disappear … my friend is in another state and tends to be sporadic to talk or call for sexting….

Not all men are like that. I don’t mean any disrespect but if we women keep dating men who display this behavior, I feel we’re inviting it into our lives. It all connects with the confidence factor I believe. I am guilty of it myself. As I got older, I learned my value. I have learned that it is my choice who I spend my time with and if I continue to meet man who only want to talk to me Sporadically for sexting then I would say look at yourself in the mirror look at how beautiful you are,… Read more »

1. Saying they will call you. And they don’t. 2. Not talking about issues at all. That’s why we seem to talk about them too much. 3. Failure to warm us up sexually prior to intercourse so no orgasm. 4. Not lasting long enough in bed but not offering a round two or saying something apologetic (if #3 was accomplished, #4 would be irrelevant). 5. Not saying sorry in general when they do something wrong. 6. Being too stoic about things or hiding their emotions of sadness. Great list by Adam! I would disagree about being wired differently. Women and… Read more »

I observed an example of this yesterday during the live homily….the real thing..com,unication is extremely important for friemdships and relationships….especially because these are your choices.

Post is nicely written and it contains many good things for me. I am glad to find your impressive way of writing the post.

I don’t think that men share their feelings very well. They hide their emotions instead of talking about what they’re going through inside! They’re afraid of letting their guards down.

We hate it when you all hide things from us ( i.e. not telling us things)

its annoying when we have to tell you how to show love. You often stopping wooing us once you think you have us. women need that reassurance

Many habits are annoying and frustrating. All because of the wrong character. Have you ever wondered how many couples tolerate another friend because of their habits? There is even research in various institutions in America.

I personally advise that weddings and acquaintances are via the Internet. Acquaintance through the site minimizes such oversights over 40 dating sites. You can get to know a friend-drgua very closely, and then a wedding or communication in reality. So my friend got married and his wife does not have a single habit that would infuriate. I advise you guys.